HIGH TECHNOLOGICAL LEVEL WITH MAXIMUM EASY OF USE

CMF® NEXT is the natural evolution of CMF, an electronic device designed to transfer very well identified packets of bioactive information to biological tissues, capable of activating self-healing processes.

Multi-frequency electromagnetic fields with varying intensity, frequency, duration, and waveform are applied by exploiting the positive characteristics of the magnetic induction with the aid of different designated devices: 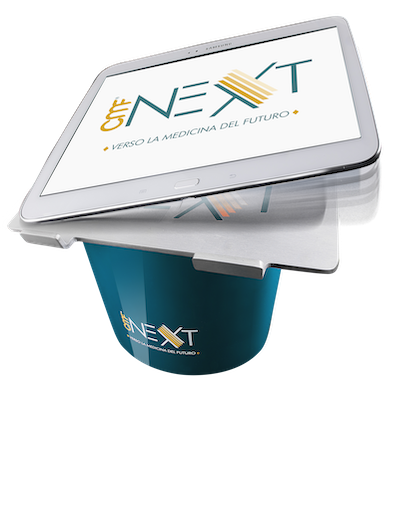 CMF® NEXT has several machine programs, each with a specific function, characterized by: You generate the wave shape, control the parameters set, and manage the functions by using sophisticated microprocessor technology with a system for generating harmonics and patented information.

CMF Technology: based on the most modern, well-known Molecular Biology studies

Dozens of scientific works have shown how Multifrequency Complex Magnetic Fields at low and extremely low frequency and intensity can activate a series of chemical/physical signals, and thus spark a series of functions known under the umbrella term of Reparative Morphogenesis (RM). This repair system is comprised of three fundamental events: molecular, cellular, and tissue repair.

Just like when you build a house, the first thing you have to do is to repair or replace the damaged “bricks”, in biology the first step is to activate a repair mechanism of the bricks that make up our systems, and that is, proteins. Some proteins are capable of repairing other proteins and are called Heat Shock Proteins (HSP); it has been demonstrated that electromagnetic radiation increases gene expression(1) of HSPs, and it is this very process that’s at the base of the CMF® NEXT regeneration programs..

By acting on the repair of the membrane proteins, the Complex Magnetic Fields can restore cell homeostasis in a much shorter time than the physiological process, re-creating the normal transmembrane potentials.

(1) “The Epistemological Bases of the Biological Information System” (F. Crescentini)

Tissue repair is the whole of molecular and cell repair as well as the mechanisms linked to the passage of intercellular information. The neo-Reparative Morphogenesis contains the information of all the constituents (bricks) to be repaired and the repair pathways; in fact, it has been shown that Complex Magnetic Fields are capable of accelerating the enzyme kinetics in Reparative Morphogenesis, considerably cutting the time for regeneration.

Some other really important effects of the Complex Magnetic Fields’ action are: the analgesic, anti-edematous, anti-inflammatory, and bacteriostatic effects.

The analgesic action is due to pain modulation my neurotransmitters with a morphine-like effect, decreasing pain by 50-70% in just 2/3 sessions.

A modular, extendable system that caters to the operator’s needs

The basic configuration can evolve and expand modularly depending on how the user’s requirements and needs change; in fact, you can buy additional packages later on, or even rent them for brief stints as well.

This website uses cookies to improve your experience while you navigate through the website. Out of these, the cookies that are categorized as necessary are stored on your browser as they are essential for the working of basic functionalities of the website. We also use third-party cookies that help us analyze and understand how you use this website. These cookies will be stored in your browser only with your consent. You also have the option to opt-out of these cookies. But opting out of some of these cookies may affect your browsing experience.
Necessary Always Enabled
Necessary cookies are absolutely essential for the website to function properly. This category only includes cookies that ensures basic functionalities and security features of the website. These cookies do not store any personal information.
Non-necessary
Any cookies that may not be particularly necessary for the website to function and is used specifically to collect user personal data via analytics, ads, other embedded contents are termed as non-necessary cookies. It is mandatory to procure user consent prior to running these cookies on your website.
SAVE & ACCEPT